On Phish, Wrigley Field and the "Soft" Sell Out

It seems like the public will never know exactly what is going on with concert ticket sales, but it is up to consumers to be smart about what is available.

It seems that -- with the Phish Wrigley Field on sale -- fans have been both smart and kind of dumb.

I had the gut feeling that the show would be an instant sell-out.  Despite the size, there was nonetheless a certain mania about the event.  Everybody interested seemed to know they were going to get a ticket, and yet they were all so worried.

That's a recipe for a ton of extras, which is why I also suspected that it would be a "soft" sell-out.  We're starting to learn just how soft it can be.  Let's look at six ways one can still potentially see the show if they're not presently holding a ticket (or if they're holding a ticket they don't exactly like), and determine what it tells us about supply, demand and the marketplace.

With two months to go, there are approximately 4800 tickets available for each night on StubHub.  That number is up by about 800 tickets each night from when I first checked in on the resale market about one month ago.

Many, especially in the 500 section, are being offered already at less than face value ($30 is the lowest I've seen).  The desirable GA floor section seems to be hovering at around just under twice face value. 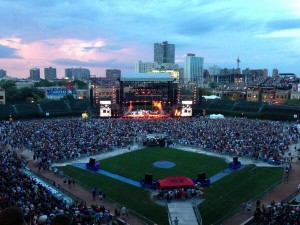 This market appears to be saturated, especially for the nosebleeds.  If the trend continues, you'll probably be able to grab a handful of these on the ground on the morning of the show.  That may drive the good seats down as well.  Expect sales close to face nearer to the show.

Last week, word spread over social media that there would be a Wrigley re-release in the mid-afternoon.  Unlike typical re-releases for sold out shows, which basically are over by the time you've heard about them, folks were pulling good seats seemingly at will.

I checked in some nine hours after the original re-re and was still pulling pairs for Friday and singles for Saturday.

I expect that release won't be the last.

For a while, it seems like Phish was really pushing these, but they appear to have backed off the marketing just a little.  Despite recently selling out the luxe Phish Riviera 2017 on the day of the on-sale, the high-end packages for June in Chicago seem to have had a more mixed reaction from the fans.

Packages are offered at one of five 4-or-5-star hotels in downtown Chicago (a cab, Uber or train ride away from Wrigley).  The two night packages for two offered lodging, about $320 worth of tickets, and unspecified merchandise packages for anywhere between $945 and $1239.  Many are still available

These have been up since February 25th, and few are even marked "sold out".  Oddly, it is not clear why certain hotels got packaged with different tiers of seating (e.g. Marriott has reserved seating only, Renaissance has either reserved or GA). But reserved lower level and GA Field tickets are both still available "legitimately" if you have a big enough wallet and need a hotel room.  Given summer rates for premium hotels in Chicago, I supposed you could do worse, but you can also stay here much more economically.

It will be interesting to see what happens to this ticket inventory if the rooms remain unsold.

Our preferred method of exchanging tickets does involve a little legwork.  But it's been an active market so far on CashOrTrade.org for the Wrigley shows.

And that doesn't count the trades.  If you're not picky, your ticket is probably on here.  If you are, wait a minute, and it probably will be.

Count this as the funniest thing I've seen yet regarding this show.  Chicago Cubs games have long been famous for the rooftop views into the ballpark.  What started as informal gatherings on lawn chairs has blossomed into full on all-inclusive box seating on raised grandstands, all positioned on top of the roofs of the buildings across Waveland and Sheffield from the ballpark's outfield walls.

Which is all fine (sort of... you're still very far from the action) if you're watching a baseball game.  But for a concert?  You'd basically be looking at the back of the stage and the crowd.

That's why the "Phish – Wrigleyville All-Inclusive Rooftop Concert Experience" for the Skybox on Sheffield Rooftop offered by Groupon was such a laugher. At least they are not marketing to hard-core fans, the copy on Groupon's website reads like it was written for somebody who'd never even heard of Phish (Grateful Dead reference, multiple references to Big Cypress, "no big radio hits", Ben & Jerry's).

This offer went up the day of the "sell-out", didn't sell a single one, and has now been removed, with the implication that it will be offered again at $179 at a later date.  Good luck with that.

This is going to happen.  I'm not entirely sure what effect webcasts, or even the expectation of webcasts, have on a ticket market.  My guess is that it's not totally insignificant but also not overwhelming.  In any case, if any of the above don't get you into Wrigley, there's always the couch. 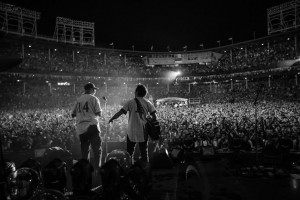 So it's more than a little crazy that these shows sold out and did so on the day of the initial on-sale.  This is essentially the playbook for the concept of the "soft sell-out", which may be cooked up to create artificial demand, particularly for uninformed consumers on secondary markets.

These shows are sold out pretty much in name only, with plentiful tickets available via multiple channels, and markets likely to soften even further as the show approaches.

What does it say to you about ticket markets?  Do you have what you need?  If not, do you expect to?