Another Summer Camp is in the books. Despite the many many festivals hosted in these parts during the summer, and and its sometimes schizophrenic bookings. it's still the closest think we have to Chicago to a major jamband festival.  We'll even forgive them for taking place in the late spring.  In the week since the festival kicked off, some incredible videos have been hitting the web.  Check out some below...

The fest has done lots to bolster UM's profile in the Chicago area and beyond.  From one of their many sets from the weekend, public and private, here's a pro-shot Bright Lights...

One of the most intriguing headlines from the festival was the UM/moe. cover swap.  Umphrey's dusted off their "Rebubula" cover for Friday's encore.  Here's moe. charging back into their cover of "In The Kitchen"

Trey Anastasio was to play two of the most anticipated sets of the weekend.  Severe weather shortened that to one (and a partial second), but this "Last Tube" clip proved he was bringing the heat.

Ragbirds went Muppets for a portion of their set.

What do you get when a band with two bass players adds a world class third?  It's not as Spinal Tappish as you'd think.  Dumpstaphunk with Vic Wooten.

A group of stars, including UM's Joel Cummins, moe.'s Al Schnier, Vic, Natalie from TAB and others took part in Everyone Orchestra.  Here's a meaty 15 minute piece, a riff on "Follow Joel"

The two first ladies of the Chicago jamband scene worked together when Janis met Allie during the FGC set...

And lest we ignore one of the many great sets from local up-and-coming jambands.  Here's Spread throwing down on Paul Simon's "50 Ways To Leave Your Lover" 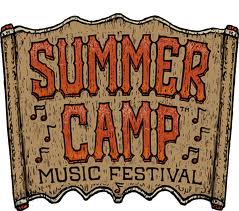