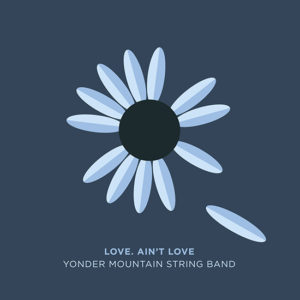 When it comes to Yonder Mountain String Band, a Colorado-based jamgrass band that manages to balance both a modern and throw-back sound, most acolytes will lead with tales of their live performances. They bring true talent and emotion on stage, traits that have netted them no shortage of boosters over the years.

But the band can also harness this appeal in the studio as well.

Their latest foray, Love. Ain’t Love, set to release June 23, leverages that on-stage vibe  while showcasing their flexibility when it comes to incorporating different genres into their bluegrass jams.

The album starts off with “Alison,” which has already gained a bit of a cult following amongst fans since it was released as a single early in the year. While the vocals in the song are quite strong, Jake Joliff’s mandolin really stands out. Allie Kral’s fiddle sings out with long legato notes that give the track an almost haunting presence.

The mysterious western sound of “Fall Outta Line” bridges the track to “Bad Taste,” another tune that dropped as a single prior to this album’s release. “Bad Taste” may be my favorite track on the album, with some of the best vocals and a really great guitar performance by Adam Aijala. Joliff has an amazing solo on this track that darts all over before getting right back into the mellow pace of the song.

“Take a Chance on Me” -- sorry disco fans, no relation to ABBA -- does manage to pull off kind of a funky vibe with upbeat vocals nonetheless, which really sets itself apart from the rest of the tracks.

“Chasing My Tail” goes back to a traditional bluegrass sound, where Dave Johnston on the banjo stands out sonically. The band was wise for opening this song with Johnston’s solo banjo riff, as it sets the tune throughout.

“Used to It” also takes an interesting shift tonally, with interesting percussive guitar and drum beats leading up into a kind of bluesy hook. Lots of emotion on this one and a standout performance by bassist Ben Kaufmann.

“Eat in God Deaf (Eat Out Go Broke)” again opens with solo licks, this time from Joliff’s mandolin. This is a more traditional bluegrass tune with a lot of energy that kept my foot tapping. This track features no vocals, focusing instead on the instrumental talents of the band, and it ranks in a close second for me for favorite track.

The album also features a great cover of King Harvest’s “Dancing in the Moonlight” that lends itself brilliantly to the band’s bluegrass sound. It’s great fun and ripe for being a regular at summer parties.

“Up for Brinkley’s” is another fun jam that features some great solos. Interestingly, “Groovin’ Away” closes the album with reggae vibes and some of the best vocals on the album piping out some very chill lyrics.

The tracks all do well to stand out on their own merits and each one sets itself apart from the one that came before it. “Love. Ain’t Love” does a good job at showing how the band’s sound has matured and branches out into many different other styles of music, all while retaining the great bluegrass sound that they’re known for.

This album is recommended to fans of Yonder, but also to those that may be new to the band as there’s bound to be a sound on here that they can enjoy.