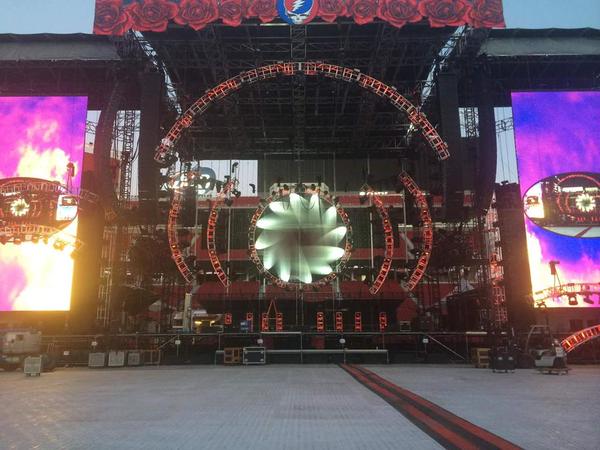 Some things have really changed since the last time the Grateful Dead played in 1995.  Like the ability for someone to sit outside the stadium during a soundcheck, record what they are hearing and broadcast it it real time via the Internet.

That's what happened on Friday night, when the GD50 Band warmed up at Levi's Stadium and tried out the production in advance of the opener of their 5 show Santa Clara / Chicago finale.

Mixlr users agentphish and trappedintime were on the spot with the live stream and assorted commentary, crazy background noise (dogs barking, planes flying over head, random wooks making awful jokes), and occasionally even some music.

Here's what the band played:

The streamers reported that, even from outside the stadium, the stage and lights were impressive.  The also added in their running commentary that around 60 people were outside the stadium when the approximately 2 hour technical rehearsal began, with about 30 left by the end at nearly 10pm PT.

For those at home, overall, it was an exercise in intense curiosity, followed by frustration, and at times, some true WTF moments.  There were over 1000 people listening by the end.  So I'm guessing I wasn't alone.

Update: Somebody captured the stream.  Here it is if you'd like to listen. Warning, for obsessed people only.

Not sure what's up with the stream but suspect my ISP is struggling with the traffic. Here's mediafire links as backup...