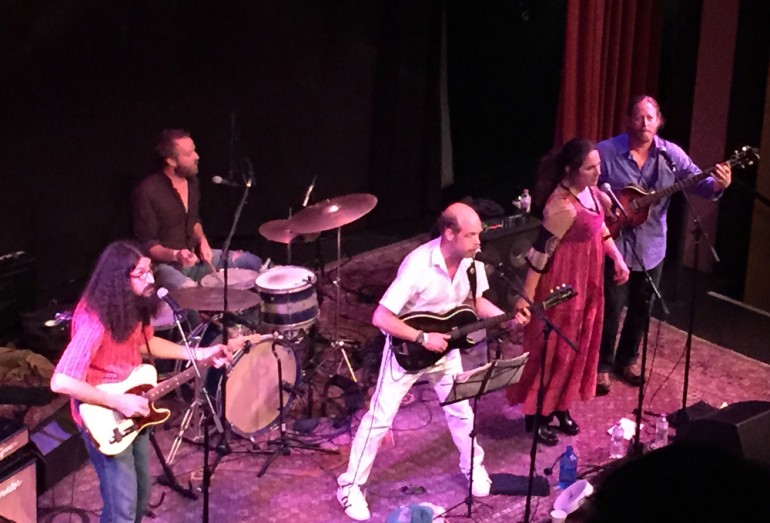 Those familiar with Bonnie ‘Prince’ Billy’s live shows know that no two are ever the same. Not only does the prolific singer-songwriter shuffle constantly and unpredictably through his massive catalog of songs, but his stage set-up also changes with each tour.

After performing a solo acoustic set at Thalia Hall nearly a year ago and appearing as a guest at Yusuf Islam’s recent Chicago Theatre date, the singer brought a full band and some new songs to Old Town School Of Folk Music on Wednesday.

Backed by guitar, bass, drums and tenor saxophone, Bonnie ‘Prince’ Billy, or Will Oldham, took the stage to huge applause, the excitement easily felt in the small, intimate room.

The band opened with a mellow but energetic take on “Where Is The Puzzle?” from Lie Down In The Light. With a simple backing, Oldham’s words and vocals remained the focus, his signature yelp-meets-croon delivered nearly a foot away from the microphone before him.

His backing band was then featured prominently for the newer “Night Noises,” the song taking an entirely new direction than the existent studio cuts. Opening with a spacey guitar jam, Oldham took a lengthy guitar solo, separating himself from the folk identity he’s best known for. Smooth saxophone soloing coexisted with the verses, until another lengthy electric jam broke out, the band taking the song to new heights.

“New Whaling” built constantly upward, Oldham’s vocals leading the way. What began as simple singing became a soft shout, Oldham soon hollering the lyrics at the top of his lungs for a climactic finish.

Oldham remained a mysterious persona throughout, dressed in all white with a tag still hanging from his white Addidas shoes. He addressed the audience only occasionally, once stating that the band had just returned from seeing the Mekons at The Hideout, likely explaining the concert’s late start-time.

As usual, Oldham’s vocals were the show’s greatest strength, his words going from quiet to loud in a split second, each line delivered in an intricate melody, timeless yet completely his own. The band matched his dynamics with an unbelievable precision, steering the songs in whichever direction the singer chose.

Regular collaborator Dawn McCarthy joined Oldham on stage for a set of songs, her band Faun Fables having opened the show.

She first sang on “Strange Form Of Life,” a song dating back to 2006’s The Letting Go. Her harmonies helped the song build to saxophone and guitar solo sections, releasing beautifully at its end.

A highlight of the night came in the form of the Everly Brother’s “Mary Jane,” a song not included or recorded for the Bonnie ‘Prince’ Billy and Dawn McCarthy covers album years prior.

The band transformed the goofy pop song into a full-on rock number, guitars and sax emphasizing a hard-rock feel, Oldham and McCarthy eventually dancing together in the center of the stage.

“Love Comes To Me” and “Called You Back” were performed as back-to-back songs from The Letting Go, each performed with a delicate, emotional nature, McCarthy’s vocal harmonies blending perfectly with Oldham’s unique melodies. Though McCarthy left the stage for the remainder of the show, the audience was certainly aware of her significance.

Always in favor of relevant and unpredictable covers, Oldham then performed Jerry Garcia Band’s “Ruben & Cherise,” an obvious nod to the Grateful Dead’s recent Fare Thee Well shows. The cover kept the fun, danceable vibe of the original, lighthearted but packed with energy, the lyrics a surprisingly perfect fit for Oldham’s delivery.

Every song from then on felt like a treat, including “Troublesome Houses,” originally recorded with the Cairo Gang, and Superwolf track “Bed Is For Sleeping.” Classic Oldham tunes “I See A Darkness” and “You Are Lost” closed the main set.

Nearly performing until one in the morning, the band closed with a massive, celebratory version of “Quail And Dumplings,” the saxophonist leading the band to a massive climax, Oldham yelling the lyrics at the top of his lungs.

The set was yet another one-of-a-kind Bonnie ‘Prince’ Billy set, spanning the singer’s massive discography while transforming each song into gigantic, full-band rock songs, a reminder of the timeless and inimitable nature of the artist’s writing itself, the reason fans will continue flocking to wherever Oldham returns next.

4. One With The Birds

7. Somebody Help Me (with Dawn McCarthy)

9. Love Comes To Me (with Dawn McCarthy)

10. I Called You Back (with Dawn McCarthy)

13. Bed Is For Sleeping (Superwolf cover)