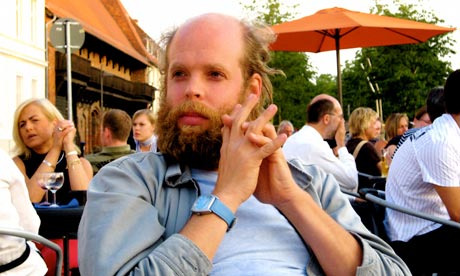 Will Oldham, AKA Bonnie “Prince” Billy, is as enigmatic a songwriter as there is, his dedicated fan base hanging on to every release of his prolific, twenty-year discography.

The stage at Thalia Hall was completely empty with the exception of a floor lamp, a small table and a single microphone. Oldham walked out wearing a blue hoodie, its hood up and tight around the singer’s head. He emptied some lyric sheets from a drawstring bag, set them on the table and turned on the lamp. The audience applauded, but he didn’t seem to notice.

Opening with the emotional Everly Brothers cover “It’s All Over,” Oldham’s live reputation was instantly confirmed. His vocals began as a slow, shaky warble but built to what was practically yelling, the singer stepping back from the microphone and pushing so much sound out that amplification hardly seemed necessary.

A medley of “2/15” and Palace Brothers’ “New Partner” followed, a treat for fans of the singer’s older work. The medley was bookended by lyrics about performing, as though Oldham was addressing the audience directly regarding his role as a musician.

“I know you take pleasure in my singing/ I know that only when I sing do you hear me,” he sings in “2/15,” while ending the song with an outro based on the idea of having to “sing these songs of questionable purpose.”

When performing, Oldham truly gives his all, the mark of a superior songwriter. He belts out lyrics and fills empty space with yodeling as odd as it is fitting. He anxiously raises a knee into the air, balancing on one leg as he sings. He kicks the floor to emphasize words. His eyes roll back at climaxes of songs, his head often looking to the ceiling as the microphone still picks up the sound, the single microphone also responsible for his unplugged acoustic guitar. His vocals were delivered with unbelievable power, similar to solo performances by similarly mysterious songwriter Jeff Mangum.

Never was a vocal delivery featured with more prominence or confidence than during traditional folk song “The Banks Of Red Roses,” performed a capella, Oldham pacing around stage, seemingly unsure what to do with his hands, offering an emotive reading of the song.

The audience was silent and attentive, listening closely to every word Oldham offered. At times specific lyrics would cause laughter, at times applause, and collective howling even ensued during “Wolf Among Wolves.”

Oldham addressed the crowd regularly, maintaining a personal, relaxed feeling to balance the heavy, emotional songs. An audience member applauded as Oldham sang, “you call on God and God is dead,” prompting the singer to pause in the middle of “Love Comes To Me,” discussing God and asking, “isn’t that great?” before finishing the song.

“Happy Halloween everybody. The next two songs are my costume,” he said before performing a pair of covers.

R. Kelly’s “The World’s Greatest” was transformed into a gorgeous folk ballad, its imagery of mountains, trees and rivers fitting perfectly with Bonnie “Prince” Billy’s discography. Oldham professed his admiration of Don Everly before the Everly Brothers’ “Omaha,” telling a story of covering the song for the indifferent singer the week before.

Later in the set, Oldham began taking requests from the audience.

“I know this is a big city, but I like to keep things informal,” he said as audience members began shouting out songs.

Choosing the first he could understand, Oldham played “Ease Down The Road” as well as Bill Withers’ “The Same Love That Made Me Laugh,” both performed with confidence and few flaws, given the impromptu scenario.

“One With The Birds” closed the set, the emotional nature and lyrical brilliance of the older track making for a perfect ending to a performance by one of the greatest songwriters around today.

Opener Manual Cinema was an excellent addition and especially appropriate for Halloween.

The eight-piece group created a 45-minute play, titled ADA/AVA, using four projectors aimed at a single screen. The actresses stood before this screen, creating silhouetted characters, while projectionists changed the content of the projectors to produce backgrounds and objects on the screen. This was projected onto a second screen, high in the air, for the audience to watch.

The performance told the story of a lonely old woman who missed her deceased twin sister, using thick, repeating imagery to show the character grappling with the idea of life and death, sorrow and happiness.

The heavy performance was accompanied only by a cello player and pianist, the latter playing sound effects from a computer. The music was tense and dramatic, to match the story’s scenes.

A refreshing and inventive opener, the audience sat quietly, mesmerized for the entire performance.