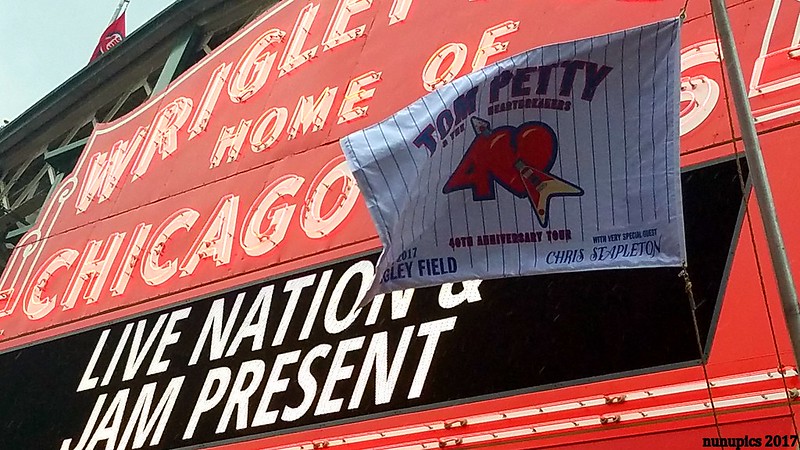 While there is a growing number of bands who can actually celebrate their 40th anniversary, there are far fewer that are able to do so in an iconic baseball stadium.

Tom Petty & The Heartbreakers are on the short list, and they brought the show to Wrigley Field at the end of June.

Now I'm a concert-lifer, but here's a band that occupies a special place in the hierarchy.

I'll make a point to see certain bands every year, multiple times per year, but this is only the fourth time I've seen the Petty show over the course of about two and a half decades.  It's a pace that works for me and builds the appreciation for this incredible body of work. 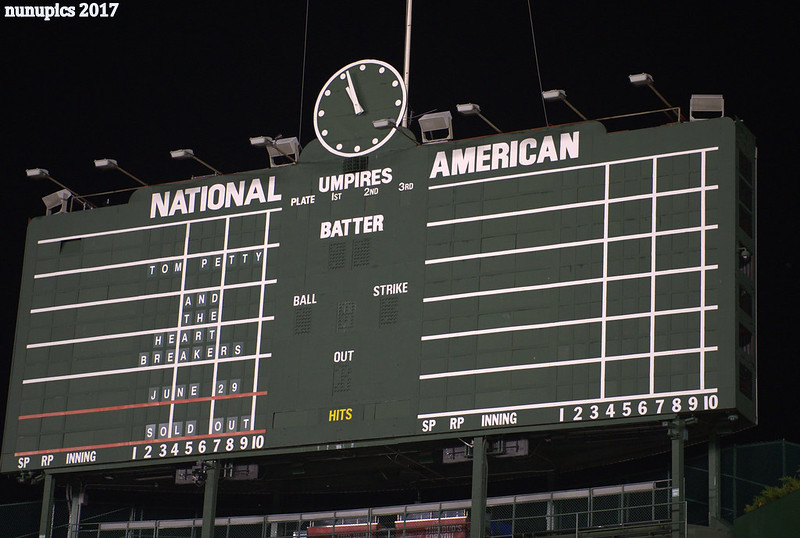 The Heartbreakers play a show that is long on the hits.  Over 19 songs performed, I think it's easy to say that 16 of them were stone-cold solid-gold smashes.  The opener was the lead track on their debut LP, totally justified, and there was a token "new one" ("Forgotten Man") thrown in there as well.

It's a formula that allows the love to run deep with this crowd.  And while my fellow concert-lifers are no strangers to devotion to a repertoire, there's also something special about a stadium's reaction to a song like "Free Fallin'" which has been ubiquitous for years, and obviously in the setlist every night for Tom. 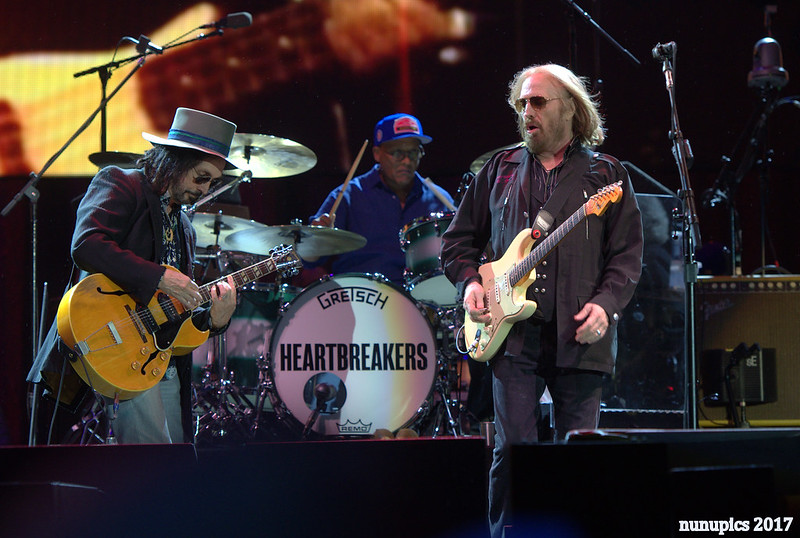 The first one is remarkable not only for its longevity and production -- the bulk of the songs performed were released in a steady stream from 1977 to 1997 -- but also because it spanned so much change in the music industry.  From FM radio to MTV to all sorts of musical trends in between, it was Petty's pure songwriting chops that cut through and connected with generations of listeners, all in attendance at Wrigley -- producing a hit parade that stands apart from nearly anything else.

But it was something that didn't necessarily carry over in the post-Napster era.  The second twenty years produced a handful of albums, but they never got the same level of traction.  It was time spent reinforcing the importance of those first twenty years, and that, too, came through.

It was an approach that doesn't lend to much variation in these songs.  Alternative universe Petty might sound a little like the cool little dissonant jam that he tacked on to "It's Good To Be King".

The band battled the rain all night, but song after song didn't dampen the spirits of the assembly.  Petty's effortless cool and support of trusty bandmates, especially Mike Campbell on guitar and Benmont Tench on keyboards, made it a show worth braving the elements for. 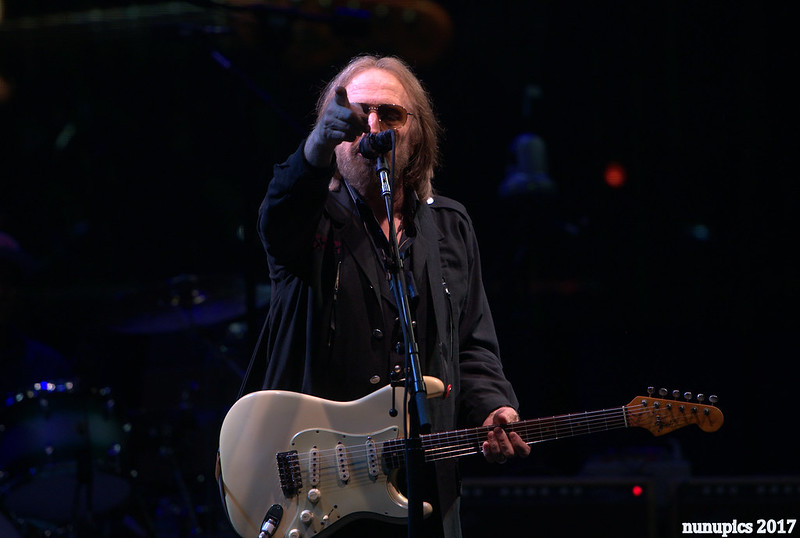 By the time he emerged for the encore in a Cubs Jersey, extolling the virtues of crazy times had in the band's formative days in the city, everybody was eating out of the palm of his hand. 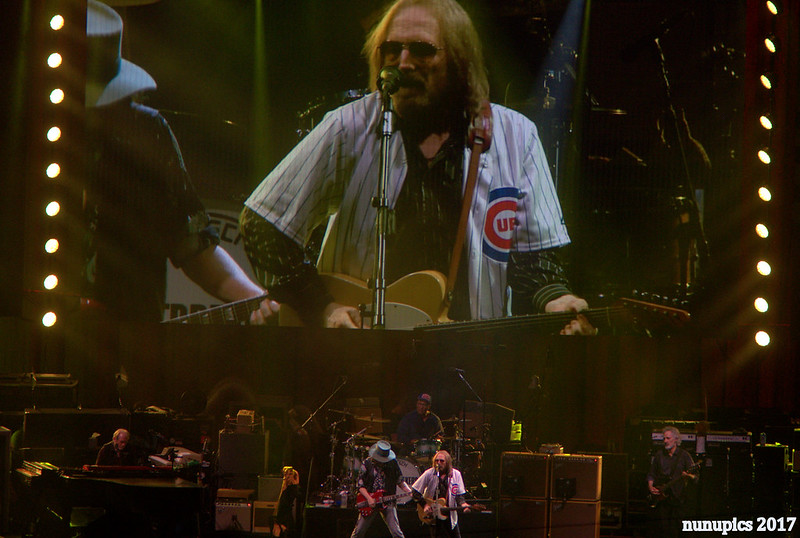 The show was opened by Chris Stapleton, a choice that at first seemed confusing, but proved to be revelatory.

Popular culture may have moved on from the likes of Petty in the last twenty years, but artists like Stapleton may be tipping the scales back.  Yes, rock and pop radio has little use for guitars, mellow voices and finely crafted tunes, but Country music may have left the door slightly ajar for a comeback.

But forget about the typical big name, flashy Country stars, Stapleton's act follows Petty's script way more. With lyrics that resonate and are singable even on the first listen, and a relatable everyman grit, he was right at home even in the stadium. The early arriving crowd got some singalong moments to "Traveler", "Tennessee Whiskey" and "Broken Halos".  There was even a little "Sweet Home Chicago" thrown in.

From his set to the show closing fireworks display -- there was plenty to sink your teeth into. 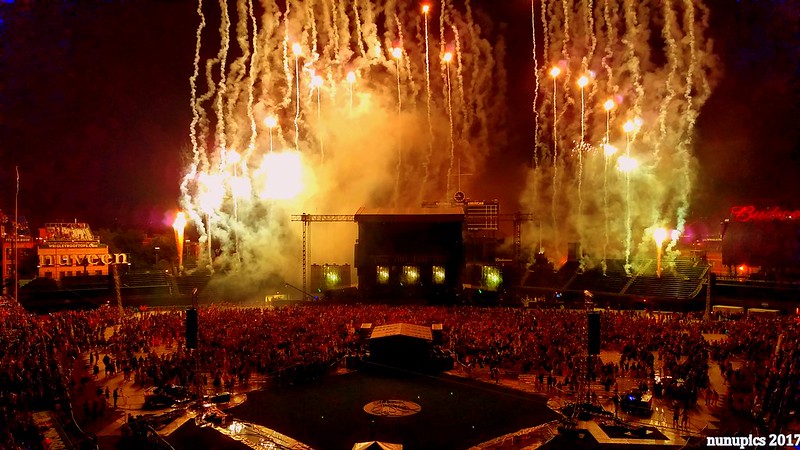