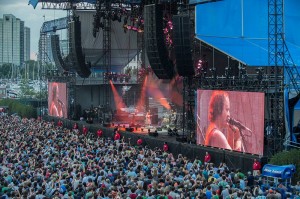 They ruined a perfectly good venue. In fact, one of the best in the city and on a good night one of the best in the world. It was a venue that filled a massive hole that existed for so long in Chicago, the mid-sized outdoor venue, and did it in the most glorious of ways, creating an intimate space in an ideal lakefront location with a unparalleled city view.

Now, because of sleazy, corrupt politics, back-handed deals and greed, LiveNation and the City of Chicago have dismantled virtually everything that was great about it and left area music fans bearing the brunt.

Maybe they lucked into the original design and layout for the temporary venue, but I'm confident the 2013 remodel was conceived by somebody who'd never seen a concert before. Minor annoyances popped up throughout Friday and Saturday, but the full criminality of what transpired didn't reveal itself to me until Sunday, when I decided to catch part of the show from the stands (despite separately ticketed grandstands and floor up front, there didn't seem to be much stub checking). It happens that the bleachers are only spot remaining that has any of the soul of the original venue -- the only perch where one can equally take in the performance and breathtaking city view.

In the transition from mid-sized to large, they built a stage so enormous it takes up your whole field of vision from the floor -- essentially removing the audience from this grand location and dropping them into a venue that could be located anywhere. The smaller stage in the old configuration didn't quite dominate in the way this monstrosity does, and where the old set-up had three sets of bleachers in a semi-circle around the stage that afforded the grand panorama, the addition of the "lawn" has narrowed it down to one (if you exclude the "VIP" section, aka corporate funded and legally scalped seating). 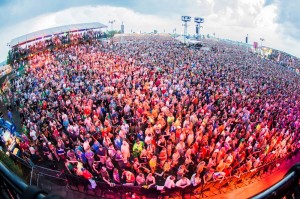 Where's The "Lawn"? Photo: Dave Vann, Phish From The Road

And of course thousands of people were relegated to an area that was really a lawn in name only. I was lenient and forgiving when I saw what happened to Buffett fans. I readily excused the conditions because of Chicago's unprecedented spring rainfall. But upon inspection of what was left, I've changed my tune.  There was just no excuse not to have proper drainage. The mix of sand, rocks and dead grass that greeted Phish fans was not only an eyesore, it was just not a very comfortable and hospitable place to spend several hours, especially when the whole section was awkwardly positioned behind what amounted to the "real" venue. In this era of webcasts, is there any reason for somebody to tolerate this? If you're just going to be watching a screen, wouldn't you rather do it in the comfort of your own home?  For a project that went from City Council approval to first show in a few short months, the whole thing smells of cut corners and money grubbing.

And the traffic flows like shit. Moving between the lawn the the front sections was farcical, with no signs or markers designating where the queue began or ended amongst the throng amassed up front to get the best views.  There was only a couple of teenagers and a barricade doing their best to check tickets and distribute wristbands. Once the show started, meeting up with friends anywhere other than exactly where you were standing was a fruitless, frustrating endeavor.  Outside the gates saw thousands crammed into small walkways to access the venue. Sure, Northerly Island is a great location, it's just not a great location for a crowd of this size, especially one that counts on the venue to host what should be their summer's true highlights -- and here both Buffett and Phish fans can reach some common ground.

But what is most unforgivable is that the temporary nature of the venue makes hosting big shows like Phish -- shows that this  remodel was ostensibly performed to accomodate -- just a plain bad idea.

The first reason, obviously, is that there is absolutely no refuge from inclement weather. For crowds of this size, the location made it not only impossible to find any place to wait out a storm within the venue, but equally difficult to seek shelter in a nearby vehicle or other permanent structure. It was not practical for a large portion of the crowd to drive, and for those that did, it could be a forty minute walk to their car and back. So, with nowhere to hide within the venue and nowhere nearby to chill until the weather passed, they essentially had no choice other than total venue evacuation long before the storm hit.   With thousands on the move and unsure of the what to do, there was never really any hope that Friday's show would resume like Pearl Jam's did across town. 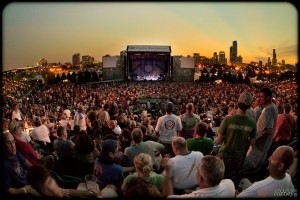 Further, the band, and their equipment were much more exposed than they would have been in a permanent structure in these conditions. Where the show may have gone on in Sunday's storm at Alpine or Deer Creek, there was nothing else to do but stop the music and batten down the hatches for everybody's safety. So while things got straightened out on stage in a longer-than-usual manner, the crowd that stuck around stood in ankle deep puddles. They can't control the weather, but venue organizers and promoters could make a bit more of an effort to minimize its effects.

I get it, LiveNation saw an opening for a venue in the city, and tried to make a move. Acts like Phish were avoiding Chicago altogether, or going to the suburbs. The city wants to collect the revenue and tourist dollars. This seemed like a slam dunk for fans, bands, the city and the promoters...

So shame on the city and the promoters for rushing this project through and half-assing the whole thing. Shame on me for giving them benefit of the doubt. And while I'll stop short of shaming Phish, the next time they build a destination weekend into their tour for essentially the entire Midwest (and with fall tour announcement this looks to be about it for 2013), I hope they can resist whatever LiveNation waves in their face until they are assured that the fans will be taken care of.

P.S. I never once saw any vendor offering $4 beers.

Music Review: All We Need Is Just A Little Patience