Where Are The Phish Dates? Summer 2015 Edition


By this point, most Phish fans with a pulse and an Internet connection know that Summer 2015 tour dates are imminent.  Most even have a reasonable idea about the tour itinerary (see bottom of this post for reasonable guesses) and are dutifully planning their summer.  But the suspense, the tension of knowing they're out there and just not announced, has the community collectively on edge.  Come on Phish... we'd like to get on with our lives, lock in some airfare, reserve (or cancel) some hotel rooms and generally relax.

So when can we expect an announcement?  A few years ago, I introduced the Phish Tour Announcement Infographic which has continued to be a resource for folks looking to reassure themselves that news will come soon.

One thing that was left off of that page was the day of the week so I've created a small chart to address that below.  I've limited to "major" announcements in 3.0 to be relevant.  There may indeed be some strategy behind Phish's announcements.  I'd say Tuesday afternoon is a pretty good time to keep your ear out for news. 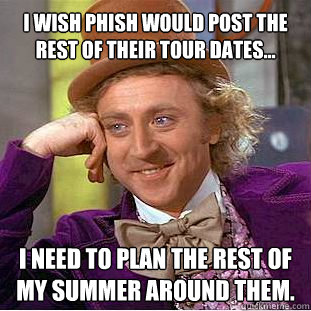