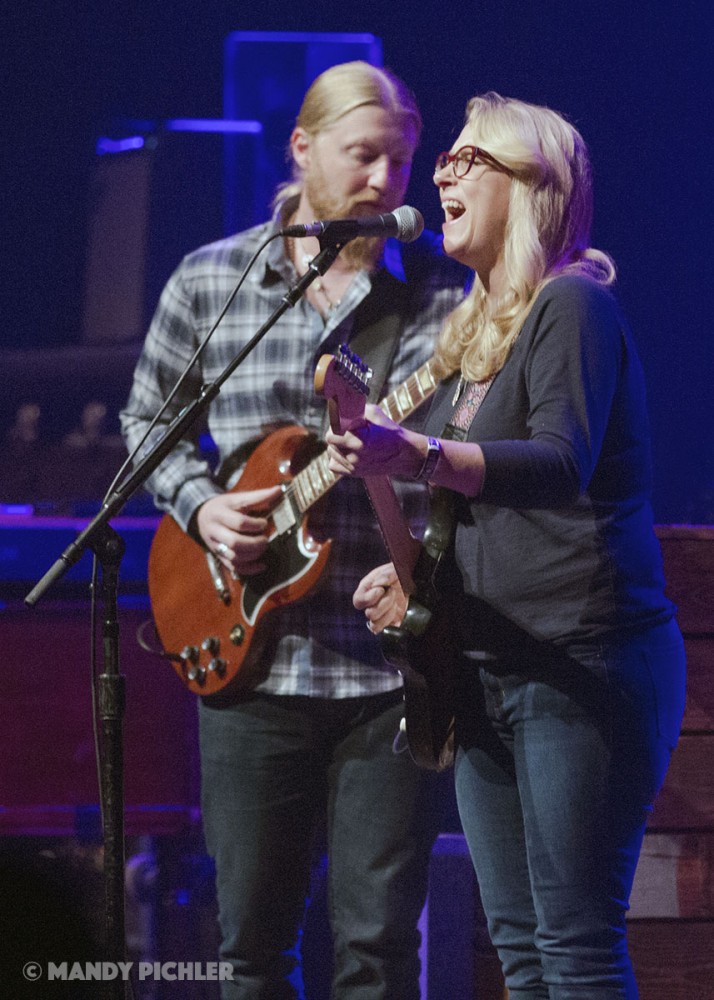 For the second January in a row, the Tedeschi Trucks Band set up shop in the Chicago Theatre and if this is the beginning of a new winter tradition, I’ll doubt you’ll hear many complaints.

The 2017 run was distinguished, not only by adding an additional day of music (plus a guest appearance with a local legend), but also because of its timing.  The three shows happened to be sandwiched around major national events: the inauguration of a new president on Friday (along with accompanying protests and celebrations), and millions taking to the streets on Saturday morning, including hundreds of thousands right here in Chicago, to draw attention to issues that matter to them.

We use artists to help frame ideas, and in some cases even speak truth to power.  Great art, and particularly great music, reflects the collective emotions and concerns of the public — it can channel conflict and unease into something beautiful.  It can highlight the things that bind us, rather than divide us.   And so while everywhere we look things appear to be fractured and unfixable, we search for symbols to let us know that there is common ground.  For my money, these were more then just great shows and a good time.  In my experience over the weekend, The Tedeschi Trucks Band represents the best of America.

With each show I attend, I get more and more accustomed to what they deliver and more wrapped up in how special they are.  It’s difficult for a band like this to exist, let alone thrive.  A relatively large and collaborative unit, the very composition of the band begins to tell this story.  Knowing nothing else about them, a glance at the diversity on stage is worth noting. 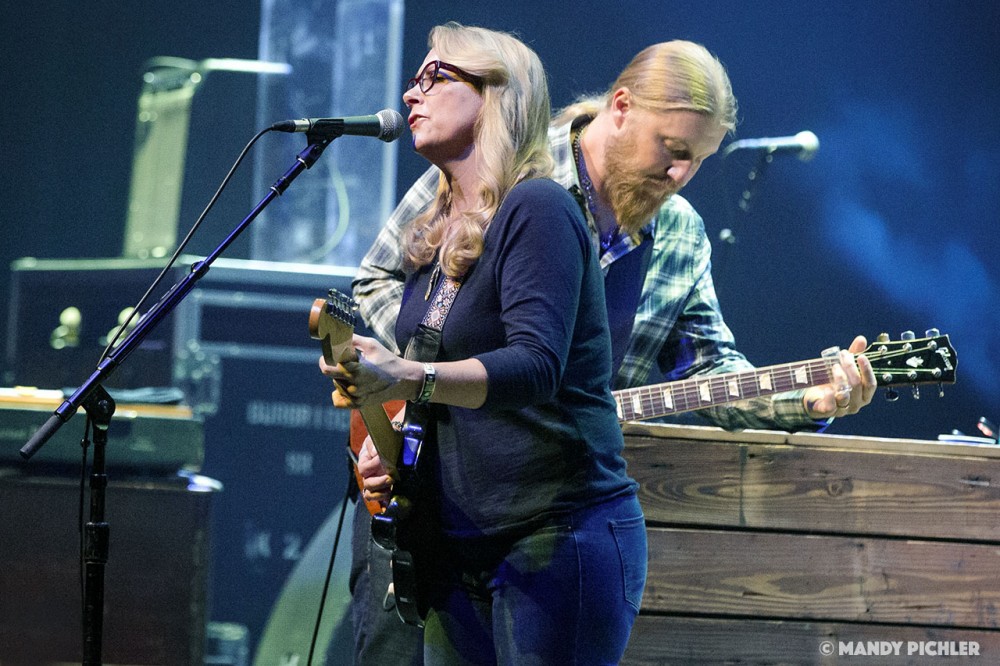 While only a quarter of the band is female, Susan Tedeschi is the group’s most visible leader and driving force behind so much of what happens on stage.  It’s a tall order, given that she is positioned only a few feet away from Derek Trucks, who is probably the band’s most accomplished technician, and so comfortably and naturally transcendent.  But Susan’s voice is equally capable of stopping the show, as she did on Saturday night during “Bird On A Wire”.   Femininity is on clear display but so is female strength and power -- and neither at the expense of muscular chops from the masculine side of the band.

The band is at its strongest with each of these sides propping each other up — its most moving moments coming when all twelve members, with different styles and backgrounds, and humming along the same wavelength.  Look no further than "Midnight In Harlem" or "Idle Wind" for evidence.

This merging of competing, yet complimentary, ideas is on display any way you dissect the band.

With Susan hailing from the Northeast and Derek from the South, even the geographic and cultural differences are front and center.  But the band makes hay from these, spanning the country with their covers from Texas (George Jones’ “Color Of The Blues”) to New Orleans (Allen Toussaint’s “Get Out Of My Life Woman”) to Detroit (The Four Tops’ “Loving You Has Made My Life Sweeter Than Ever") to San Francisco (Sly & The Family Stone’s “Are You Ready”) and beyond.

Look at the band through a conservative lens and you can appreciate their healthy respect for what came before them, mixing great classic blues, gospel and soul into original tunes like “Don’t Know What It Means” and “Anyhow”.  In tipping their hats to pioneers like B.B. King and Nina Simone, they acknowledge great tradition and their small role in the greater musical narrarive. 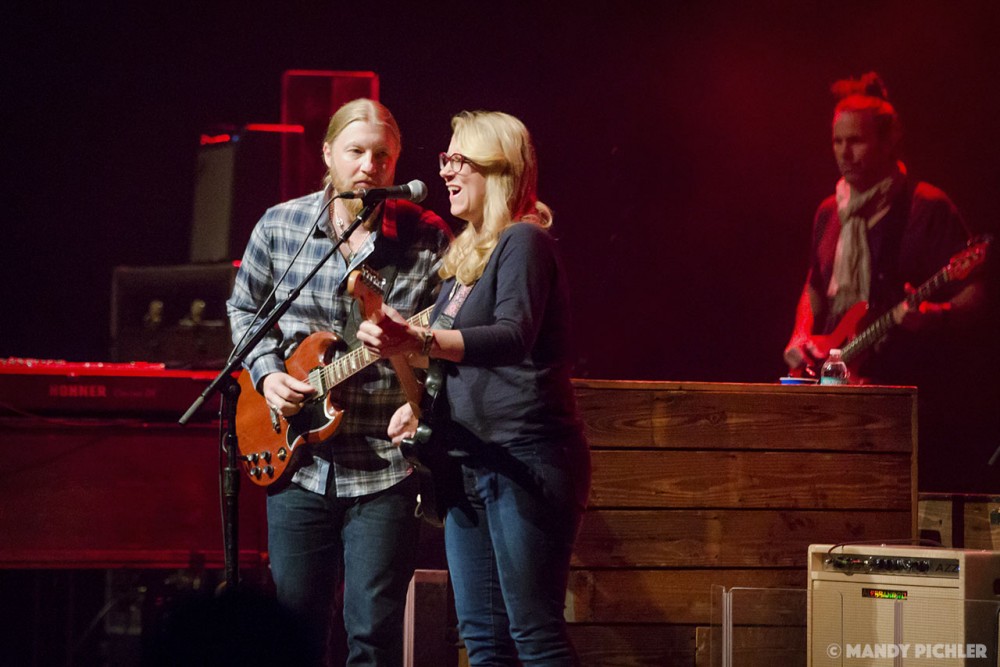 A concept like “family values” is not foreign to the TTB — in fact, the band is literally family (its namesakes are married) and they project love and mutual respect of amongst each other.

The band is welcoming, sharing the stage on Thursday with North Mississippi All Stars, and inviting guitarist Luther Dickinson to join them that evening, as well as Friday night.  They find solace in connecting the musical dots -- dipping in to the Derek & The Dominoes catalog multiple times on Friday.  Of course, Derek has toured with both Eric Clatpon and The Allman Brothers, making the choice an slam dunk.

And yet, there is a pronounced progressive voice in these performances as well.  They like to shake things up and break barriers, spending time in each show in exploring deep, sometimes provocative improvisation.

During Saturday’s show, they performed a tune called “Ali” which featured samples of the great fighter and social justice warrior Muhammed Ali. 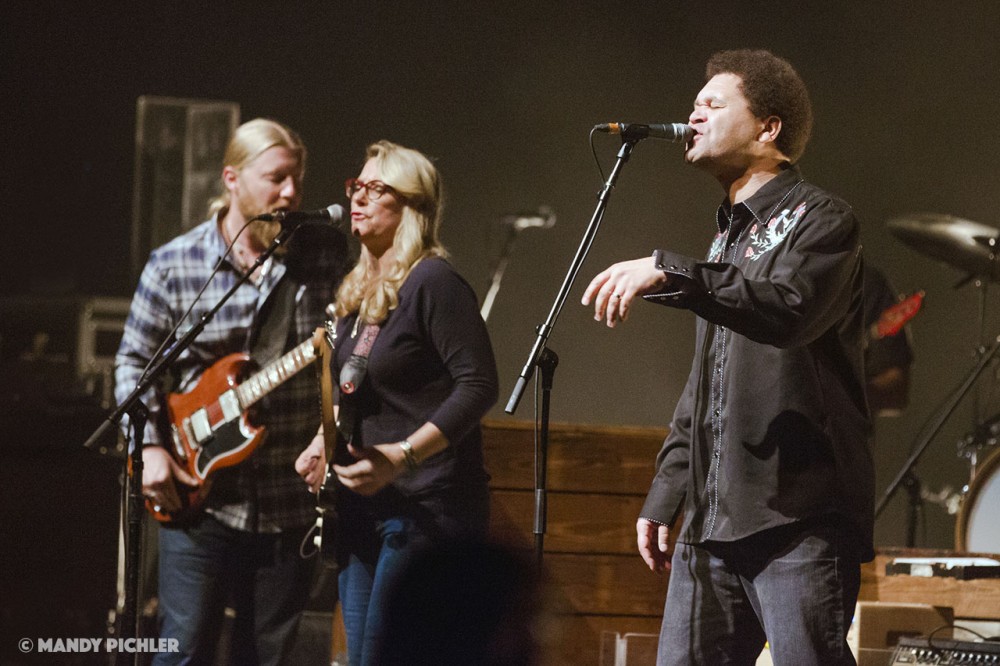 With two dynamic leaders, it is still important that everybody in the band has a voice, and as a unit they are committed to each being heard, with the band reconfiguring itself on the fly to shift the spotlight to individual performers throughout the run.

Subtly, they even celebrate multiculturalism, introducing Indian (by-way-of George Harrison), and Latin (by-way-of-Carlos Santana) music into their already heady mix during “Within You Without You” and “Soul Sacrifice” respectively.

But perhaps most keenly American is how hard-working and gracious they are.  Delivering only a handful of repeated tunes over the course of seven hours of music over the course of three nights.  As a band, they are deeply committed to their audience, with Susan as their magnanimous representative, extending thanks for allowing them the opportunity to create for us.

No matter where you fall on the political spectrum, I’m sure the Tedeschi Trucks Band feels right.  Because we know through their art that their values are universal.  Their successes are our successes.

By the time they launched into “With A Little Help From My Friends”, as their final song in the encore after three nights, the message couldn’t be any clearer.

We’re all in this together.  We make each other better.  We rely on each other.

And there’s nothing more American than that.

For additional coverage, including setlists, audio and video from all three shows, check out these links: 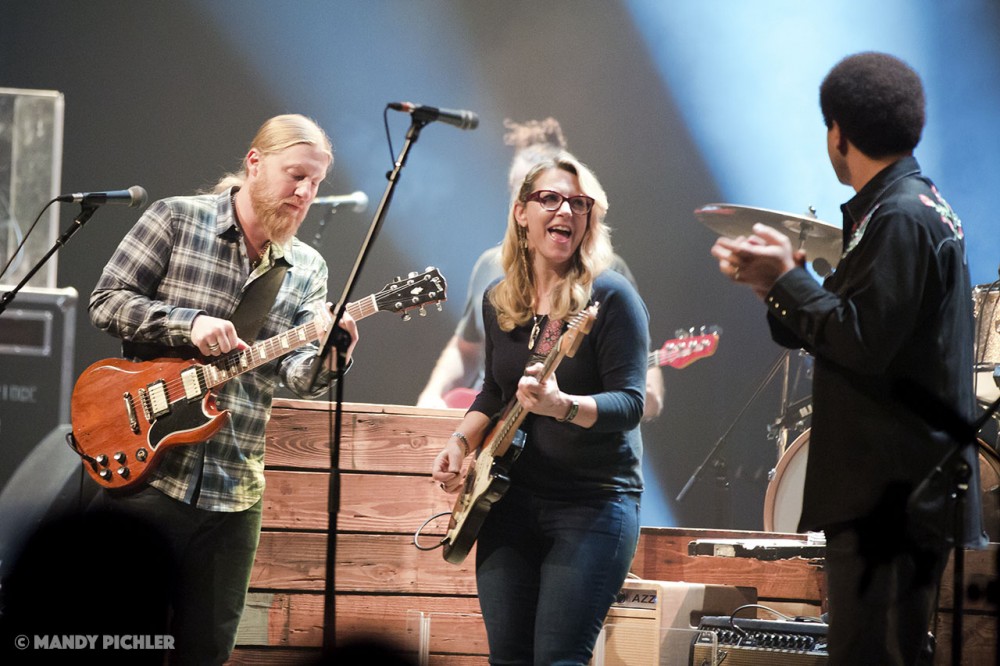