More than just about any band (and I'll throw the Beatles, Dead, and Zappa in there too), Talking Heads have provided direct inspiration to the jamband community.  Attribute it to their rhythmic ideals, engaging melodies or passion for innovation, but with only 8 studio albums to draw from, the variety of tunes covered and interpretations that exist is remarkable.

In celebration of the Heads' too-short career, The Barn has put together its own makeshift tribute album, culling the best live cuts of hot Talking Heads covers from acts that fall broadly under the term "jamband".  As a measure of their influence and prominence, Phish and Widespread Panic each get two selections in the mix, but we've also included cuts from lesser know acts, whose offerings include acoustic reimaginings and some downright meaty improvisation.

Without further ado, we give you... Jambands Celebrate Talking Heads

Here's what you're listening to...

Kicking off the Talking Heads frenzy proper with their 1996 Halloween gig, Phish's version of  "Once In A Lifetime" sets the gold standard for recreation of the Heads' complex sound, while adding a little something from the interpreters for the audience to chew on as well.  In turn, the performance of Remain In Light influenced Phish's playing in exciting and unexpected ways over the next several years. 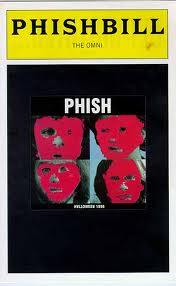 Widespread Panic, with the help of Randall Bramblett on saxaphone, works up a smoking "Life During Wartime" at the Classic Center in Athens in 2007.

Switching over to piano from his usual loop-driven guitar workouts, one-man-band Keller Williams offers a perky, quirky "Stay Up Late" from a 2004 gig.

Greensky Bluegrass showcases their sweet harmonies and whimsical picking, in this acoustic interpretation of "Road To Nowhere".  A staple of their live act, this one is from the 2009 Summer Camp Festival.

Jambands gravitate to Talking Heads funk, so its no surprise at how nasty Robert Walter's organ driven instrumental version "Swamp" sounds, performed with The Twentieth Congress in the fall of 2004.

The rhythmic juggernauts of The Motet threw down a Talking Heads greatest hits set featuring String Cheese Incident keyboardist Kyle Hollingsworth on Halloween 2008.  Righteous jamming is abound in this eleven minute version of "I Zimbra", particularly after the drum break, where the band grabs hold and works out several themes.

New Monsoon's satisfying "Slippery People" holds very true to the original, but they manage to sneak a nice guitar solo in there, making the switch back into the vocals in the end quite revelatory.

The vocals are a little rough for "And She Was", but, oh, that lead guitar from The Breakfast's Tim Palmieri!  He's got a tone and command of the instrument that just slices right through you and he packs enough of it into the brief solo that rounds out this version from '08 to get you going.

"(Nothing But) Flowers" is such a great song, it makes lyrics about Pizza Hut seem poignant and timeless.  Euforquestra supplies a jam that employs horns and hand drums to deliver a world music inspired version worthy of its lyrical content.

Everything about the Dave Matthews Band sound seems to justify a cover of "Burning Down The House", from Dave's breathy vocals to Jeff Coffin's lyrical sax lines.  This version is nabbed from the band's performance at Chicago's Wrigley Field on 9/17/10.

Chicago's own Umphrey's McGee doesn't skimp on this fourteen minute exploration of "Making Flippy Floppy".  Covering some interesting bass-led territory in the  middle section before finally working up to a blistering guitar duel between Jake Cinninger and Brendan Bayliss in the final minutes.

When I saw Yonder Mountain String Band perform "Girlfriend Is Better" at the Vic Theater in the 2000, it was the clear highlight of their set, with each of the stringed instruments hammering out the tune's hypnotic rhythm.  This version takes it a step further with "official bluegrass drummer" Jon Fishman contributing at the Fourmile Canyon Benefit in Broomfield, CO from 10/9/10.

Some argue (and I would certainly entertain discussion on the topic) that Phish's performance on New Years' Day 2011 contains the most inspired jamming since their 2009 reunion.  Kicking off the second set with this juicy version of "Crosseyed & Painless", I submit this as Exhibit A.

You've got to hand it to Widespread Panic, plucking a deep track from the 1986 film soundtrack True Stories, and making it a cherished staple of their repertoire.  This Mike Houser-era version of "City Of Dreams" is from the legendary 1996 Sit and Ski run and features the fiddle of David Blackmon.  Beautiful.

Another bluegrass inspired Heads cover, and probably the most oft-covered tune in Talking Heads' songbook, Cornmeal's "Naive Melody (This Must Be The Place)"  finds some room for wonderful extended fiddle solo.

Mr. Blotto covered the entire Stop Making Sense album as the encore for their show on a July night a couple of years ago.  "What A Day That Was" is everything that makes the Talking Heads great: multi-layered, raw, emotional and yet, danceable.  Blotto nails it.

Okay, so maybe The Grateful Dead weren't channeling Talking Heads with this one, but no jamband related list is complete without a little Jerry.  You never know.... their "Take Me To The River" was a nice April Fools Day treat at the Pyramid in Memphis in 1995.

Bonus Track: Mr. Blotto's Paul Bolger the plays up the "David Byrne and a boom-box" act on "Psycho Killer".