The 30db / Van Ghost pairing was just one of the many inspired double (sometime triple & quadruple) bills that the Abbey Pub has been programming lately and certainly one of the most high profile, considering the national prominence of the artists involved, yet a strong sense of Chicago hung in the air all night.  This show felt like another stop (the peak maybe?) in a series of adventures that a couple of musically inclined friends with Chicago roots had in this world class city over the course of several days.

Towards the beginning of the week, 30db's Jeff Austin tweeted the following:

Indeed, several new songs seemed to materialize out of a songwriting binge in which the friends engaged in the days prior to the gig, but others came from other unlikely sources: Austin's December scuba trip to Belize ("I haven't seen so many tanks since '94 Phish Tour"), an Umphrey's Jimmy Stewart improv from the past fall ("Cut The Cable") or songs written specifically with the other in mind.  This camaraderie, punctuated by tales of drinking (the two swigged liberally from bottles and glasses on stage throughout the night) and gallivanting, served to make this rare appearance by the duo special for those in attendance.

Taking a decidedly more song based approach than Umphrey's McGee, and without the bluegrass underpinnings of Yonder, 30db relies on solid songwriting to buoy the show.  But Brendan and Jeff always can fall back on acoustic pyrotechnics to keep the audience engaged -- often times trotting out fierce runs on the guitar and mandolin to spice up some of the more unfamiliar songs.  And for a band with a reputation for tunes that border on the melancholy, there was rarely a hint of seriousness in the proceedings, with a frat-house vibe running through the copious amounts of between-song banter.

Moreover, their nods to influences, whether the Guns N Roses cheeky "Used To Love Her", a by-request "Good Times Are Killing Me" or the revelatory and atmospheric take on Beastie Boys' "Something's Got To Give" gave the show some additional depth and created a thread through the proceedings (the latter two songs are featured at 30:30 & 10:20 in the video below).

The duo also joined openers Van Ghost for the final song for their short set on the Dylan classic "I Shall Be Released".

For their part, Van Ghost, performing in the stripped down acoustic format, did not skimp on not the polished pop that has made them buzz-worthy in their own right.  If some of the 30db tunes could be construed as heavy or depressing, Van Ghost staples like "Domino Effect" and "Modern Day Love Affair" were elevated with the spirit joyful Americana, with co-lead vocalist Jennifer Hartswick, fresh from a NOLA Jazz Fest appearance, even throwing out some bouncy funky trumpet lines to complement her robust vocal performance.

They, too, used the opportunity to test out some new material from a forthcoming album.  Michael Berg's keen songwriting sense has not wavered, and the band can really sell it.  Even with acoustic guitars, Van Ghost's overwhelming musicality, ebullient hooks and commanding vocal presence makes even the fresh songs feel like standards.  In a city with an overstuffed folk and acoustic scene, Van Ghost has carved themselves out a welcoming corner, blending a metropolitan savvy with their stripped down rootsy sound.

Encore
Return Item, Used To Love Her, Always Up 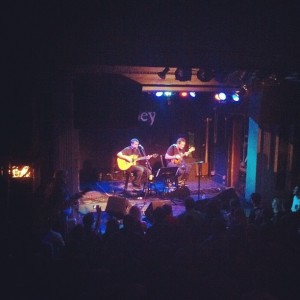