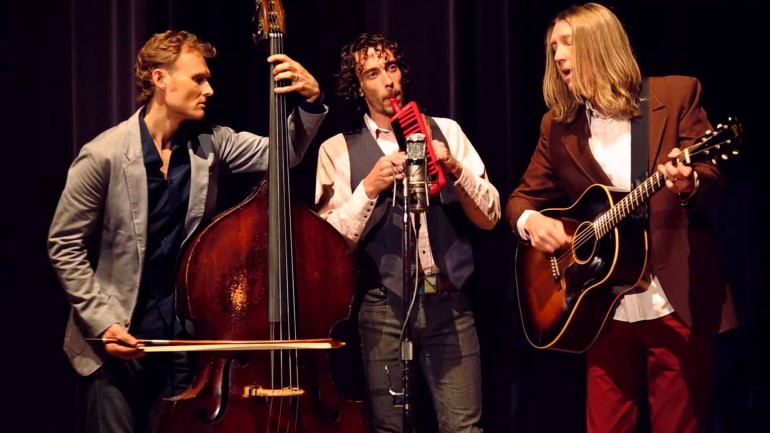 It’s easy to see why the jam-band scene has embraced The Wood Brothers with such passion.

Their performance at The Vic featured everything fans could want, from stylistic variation to expert musicianship to a fervent stage show that found the musicians perfectly comfortable in a larger setting.

The show was “the most tickets we’ve ever sold ever, anywhere,” according to lead singer Oliver Wood, and after a scorching two-hour performance, the band not only justified the move to larger capacity venues, but demonstrated a maturity and cohesion that allowed their music to fill the theater’s space properly.

A large part of this is due to the band’s newest full-length, Paradise, their first to feature compositions written by all three members, the Wood Brothers now expanded to include percussionist and pianist Jano Rix. The record embraces a full-band sound, allowing the songs’ grooves to build to larger heights.

The band instantly demonstrated this by opening with Paradise’s “Never And Always.”

The song began as a mellow, soulful performance, the focus on Oliver’s vocals and acoustic guitar, but built to include three-part harmonies from the other members. As bass and percussion pick up, the song becomes a roaring instrumental jam, Oliver’s slide guitar solo driving energy through the roof.

Of course, the band is careful not to solely set the spotlight on the lead singer.

The song’s conclusion was followed by a long upright bass solo, the likes of which only Chris Wood could ever deliver. The veteran bassist slowly sped up until settling on a fast melody, one which he would continue improvising between songs throughout the set. As Rix comes in with percussion, the solo becomes a sort of hoedown, eventually turning into fan favorite “Atlas.”

Momentum only increased with “Mary Anna,” a song capable of converting practically any music-lover to a Wood Brothers fan with its catchy, half time choruses and timeless harmonies. Reminiscent of older groups like The Band and recent groups like Houndmouth, the track is a perfect combination of genres both new and old, classic yet distinctly their own.

Even without Oliver consistently emphasizing his being “excited to be here,” it was obviously so. The band seemed especially tuned in, musically, yet loose and carefree, in physical presence.

“Snake Eyes,” a driving, electric rocker from the new album, found Chris practically salsa dancing with his upright bass, while Oliver hopped around stage with his guitar, a massive grin across his face.

“Postcards From Hell” began with delicate fingerpicking, Chris entering before the chorus with soft, legato notes, using a bow on his bass. The song’s Chicago reference earned cheers so massive that the band was practically drowned out by the packed audience. Deviating from the studio cut, the song ended in a climactic jam featuring heavy use of the drum kit and a harmonica.

Chris handled the vocals on the slow, sentimental ballad “The Shore,” with Oliver providing harmonies. The band continued building energy after, eventually reaching the shuffling boogie groove of “Who The Devil.”

As though paying homage to the traditions of both the jam band and bluegrass scenes, the band then reached the “O Wood Brother Where Are Thou” section of the set, as labeled by Oliver.

With a single microphone set up between the three members, the band quieted the rowdy crowd and performed, unplugged, a breathtaking rendition of “The Muse,” its delicate, heartfelt nature displayed perfectly by the intimate setup.

The band then invited opener The Rigs to the stage for a fun and upbeat “Shoofly Pie,” the six musicians still crowded around the single microphone, each lending harmonies to the chorus.

As though entering a second set, the Wood Brothers then went electric, Rix returning to the drum set and Chris trading for an electric bass. The transition from folk to rock was beginning.

The funky “Wastin’ My Mind” opened the set, its straightforward rock composition almost startling after the more complex acoustic songs that preceded it. “Singin’ To Strangers” followed in similar footsteps, Chris’s electric bass a massive presence throughout.

“Chocolate On My Tongue” returned the band to its earlier days, the song delicate yet deliberate in its performance, Chris and Oliver both nailing each note and working in perfect unison.

Yet the ‘rock set’ truly took off with “Honey Jar,” from 2013’s The Muse. The song is exactly why jam-band fans flock to see The Wood Brothers, stretching out to fit long, improvisational jams into its funky vibe, the groove broken up by the infectious chorus, performed in half-time.

If ever the Wood Brothers proved their ability to continue to sell out larger venues, this was it.

Chris danced with his bass while Oliver walked to the edge of the stage, the audience screaming as he raised his soloing guitar over their heads. The sound blared at massive volumes, the band refusing to let momentum fade once throughout its performance.

The band closed the set with a cover of The Band’s “Ophelia,” featuring Rix on vocals and a thumbing electric bass solo the likes of which no other bassist could match.

After the band left stage, Rix appeared alone behind the drum kit, turning to a piano that was largely left untouched during the rest of the set. He soloed for awhile, mixing jazz and blues with competence, until eventually settling on a familiar melody. As Oliver and Chris returned to stage to massive applause, the band broke into “Luckiest Man,” the fan-favorite becoming a massive sing-along, the audience eventually taking the vocals over entirely as Oliver stepped back from the microphone.

With more than a thousand enthusiastic audience members harmonizing in unison to a song recorded a decade prior, this was a clear sign for The Wood Brothers. A band that I used to see play to less than a hundred people in small bars was now selling out The Vic, and, most importantly, they deserved it. They earned it.

Throughout a two-hour set, the band showed an experienced maturity that felt natural, as though they had finally landed exactly where they needed to be. The Wood Brothers have earned their spot in the jam-band circuit, and are surely here to stay.