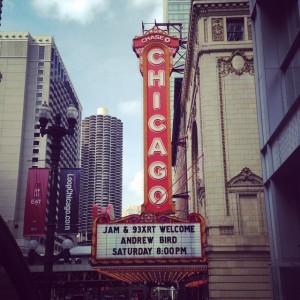 Over the last few years, Andrew Bird has continually moved toward a more traditional, folk-oriented sound. His most recent touring band, The Hands Of Glory, reflects this change, perfectly relaying Bird’s vision through mature, full-band arrangements.

Bird’s date at The Chicago Theater marked his first return home since December, and the artist was visibly moved to be performing to the crowded audience.

“These hometown shows still get me,” he said nervously.

Bird opened the show with three solo performances, the only of the night. Scattered violin notes looped endlessly atop one another were followed by long, elegant strokes, becoming a lengthy rendition of “Ethio Invention.”

The sound filled the theater’s space perfectly, even without the band, each note containing warmth and clarity.

“Hole In The Ocean Floor” kept the dramatic feel before “Plasticities” lightened the mood. The stage lighting was revealed during the former, consisting of long strands of bulbs draped at angles over the historic theater’s massive stage.

The four members of The Hands Of Glory joined the violinist for the remainder of the show, the set heavily featuring covers of Handsome Family songs and newer Bird material. Upright bass, slide guitar and soft drumming met Bird and Tift Merritt’s vocals.

“Effigy” continued the folk feel with a hypnotic introduction and a fiddle breakdown in the middle, Bird quickly switching from guitar to violin.

The band performed a few songs hunched over a single microphone, sharing the space for three or four-part vocal harmonies. Interestingly, Bird chose “When The Helicopters Come,” an often-forgotten Handsome Family song recorded for the Hands Of Glory album two years before the more recent Handsome Family collection, Things Are Really Great Here, Sort Of….

“Railroad Bill” picked up the energy with its old-time feel, complete with fast picking on acoustic guitar, and received huge applause at the song’s conclusion.

Though the band sounded perfect, the show lacked the experimental nature of earlier Bird shows, a notable change for older fans in the audience. The focus remained on the band, with fewer solos and minimal looping. While this reflects the musician’s current work, it’s a difficult change to accept, making a clear distinction between an Andrew Bird show and one by The Hands Of Glory. 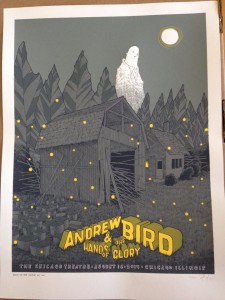 Nonetheless, denser material filled up the end of the set.

“Three White Horses” was performed in a ghostly manner with significant help from the pedal steel guitar. “Pulaski At Night” grew and grew, Bird’s vocals forceful and confident over layers of violin.

“Danse Caribe” hit a huge climax in the middle, featuring a fast and clean pedal steel solo, the band lit by one giant, circular light in the center of the stage. A beautiful violin ending using long, cinematic notes closed the set in a style that only Bird has perfected.

The highlight of the show came at the encore with a performance of “MX Missiles,” performed by only Bird, a bassist and guitarist. As Bird sang the verse nearly a capella, there wasn’t a single sound in the audience, as if all 4,000 audience members were holding their breath.

Two Handsome Family songs closed the show, beginning with a fairly straightforward version of “The Giant Of Illinois” before “Don’t Be Scared,” which grew to a somber heaviness with intense background vocals and an explosive climax, a fitting closer for the set.

Every Andrew Bird tour is different, and the Hands Of Glory finds him seeking comfort in conformity, floating in the stream of his musical influences instead of fighting the current.