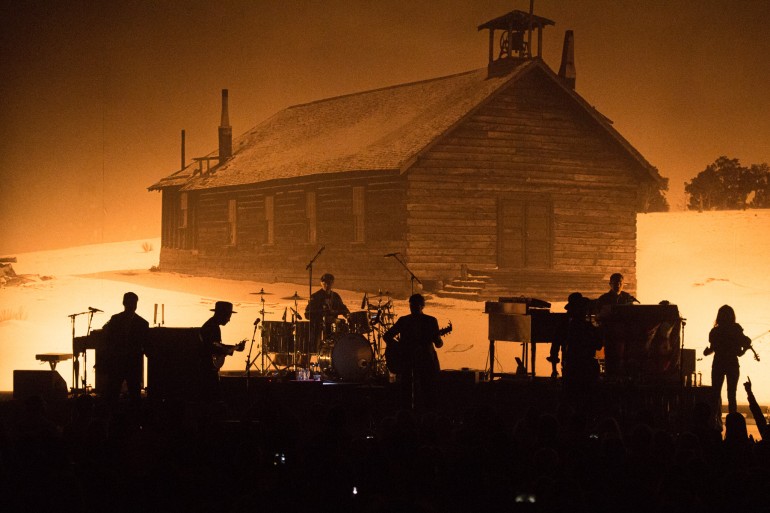 Count The Avett Brothers among the artists capable of selling out Madison Square Garden in New York City.  So when they hit town for three nights at the relatively cozy Chicago Theater, you can excuse the fans for being a little giddy.

So they ended up with a marriage proposal from a fan prior to performing "Fisher Road" on Friday night.  Yes, they accepted.  No word yet on a date.

But the real drama was conveyed through the band's music and stark, evocative stage decoration, making the grand old theater that much more of a special place.  The show opened with the band in silhouette, a full stage picture of an old barn behind them.

At times, the seven musicians played 9 instruments at once, with Seth doubling on the guitar and high hat while Scott played banjo and harmonica.

The brothes brought their usual crew: Joe Kwon's cello, which is like another voice, Bob Crawford holding down the bass, plus Tania Elizabeth on violin, Paul Defiglia on keys and Mike Marsh on drums.

About halfway through the show the giant picture of the barn was raised to reveal a new, enormous image of a skull on a piles of books. The contrast seemed to mirror the duality to their work: outside/inside, fun/serious, superficial/emotional.

Songs moved at a fast clip, squeezing all 25 in just over two hours. The crew ran on stage between nearly every song to exchange instruments for Scott, Seth and Bob.

If you're an Avett's diehard, "Ain't No Man" is probably already your new favorite song.  Featured on their forthcoming album, it has a funky and addictive quality upon first listen. It has already shot up the Spotify playlist rankings. Bob Crawford and Mike Marsh held down the bass and drums while everyone else in the band sang. Seth added a tambourine which he tossed to Joe about halfway through.

And yes, with this band, you do get style as well as substance.  Three women in front of me debated whether they liked the Avetts better with their new haircuts, having recently abandoned beards and long locks for sleek short cuts.

But the energetic crowd knew when to dial it back, too.  During the verses of "When I Drink", all the whoopin' and hollerin' ceased. There was no sing-along, no chitter-chatter. The audience wanted to hear every word and every nuanced note.

The upright piano that had been sitting unused at stage left finally got its day during a beautiful "Head Full of Doubt/Road Full of Promise".

The show concluded with a little something new, something old, and something celebratory.

"Smithsonian" was a contemplative song from the forthcoming album about getting old.

But the bluegrass of "Salvation Song" concluded the performance with what the band does best, ending in a five-part a cappella vocal harmony.

There were no "Purple Rain" quotes like the previous night, but when the clapping ended and the house lights came up,  "Let's Go Crazy" played over the PA.  Indeed.

Left on Laura, Left on Lisa

The Weight of Lies

Winter in My Heart

Nothing Short of Thankful