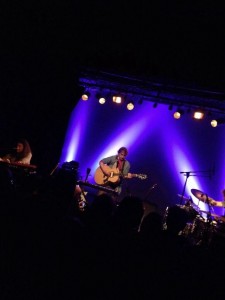 Tim Rutili is the mastermind behind Califone, the sole constant in the Chicago band’s influential 15-year existence.

Califone’s latest release, Stitches, marked a new direction for the band with a cleaner production value, prominent vocals and more direct, personal lyrics. Around the time of its release, Califone embarked on an intimate living room tour, something Rutili hopes to do again. Their current tour wraps up at Lincoln Hall on Saturday, February 1 with William Tyler supporting

I had the chance to speak to Rutili about the newest record, his upcoming tour, musical influences on the band’s unique sound and more. In conversation, the songwriter was obviously extremely proud of the new record and called this tour the most enjoyable in years.

So what led to Stitches? What influenced or inspired the new record?

I just started writing songs and made a record out of it. I don’t know. It was a little different than before, but I had gone a long time without writing and sort of found myself with a bunch of ideas and made a record.

It felt more personal and lyrically direct to me. What led to that?

Lots of stuff, but it’s all in the music. I don’t know, it’s weird talking about it. And I’ve done so many of these interviews… It’s all there, I’d almost rather have you write what you think about the record. A lot of it is like stuff I don’t want to talk about, that’s why I put it in songs.

There’s a lot more religious imagery than Califone records of the past. How or why did this come about?

I think there’s been a bit of that in earlier records. This time it was clearer to really explore archetypes. So it’s not so much about the spirituality behind the religious images, but more the stories behind the characters that were used in the songs. They were characters that I could relate to, in some weird way, and to do it without God you kind of transpose your own journey onto the journey of these characters and the symbolism in those stories.

Can you give me an example of this?

Well, if you look at Moses… in the beginning he starts as an orphan and at the end he’s someone who’s gone on this incredible journey and done these insane tasks, and then can’t reap the rewards of his works, you know? I think a lot of people can relate to that, and I know at that time, writing that song, I definitely could.

I don’t really have God and religion in my life, and I’m doing okay without it, but I do have a lot of questions about it, and a lot of that stuff is explored in this record.

Have you ever been a religious man in any way?

No. But a lot of it is why these stories last, and why they resonate with people, so much that they kill other people because of them, you know, because of these ideas.

So how about the production? It seemed like a new direction, maybe a little cleaner, a little more vocal-oriented, lyrical. Was this a conscious effort?

Yeah it was. I’ve always been afraid of my own voice so it was a challenge to make sure that I really, really worked on the lyrics and made sure that the vocals were clear, and a lot of effort went into making sure that the songs came out and weren’t buried under noises. That’s probably going to change on the next record, but for this one, those songs were asking for clarity.

That makes it sounds like you kind of have the next record planned?

Can you tell me anything about it at this point, what to expect?

No. I’ve got a lot of notions and a lot of ideas, so I think I’m going to start working on that pretty soon.

Does the change in band members make a huge difference in your sound or is that more your own conscious effort? Do you already know what you want members to do going into a song?

No, that makes a huge difference. This one was done without Jim Becker and without Joe Adamik and we’ve made a whole bunch of records with a solid band, so this is the first record in a long time without a solid band. And that was really a challenge and really interesting. It turned out to be necessary and really good for the record, in my opinion.

Did some surprises come up with that? When you were working on it, did members bring a lot of new things to the table?

A lot of different people added a lot of great stuff. Some people we called in with stuff in mind and some people we would just have them hang out and contribute what they heard and what they wanted and then kind of sorted it all out in the mix.

Even going back to Roomsound and the Califone EPs, Califone’s sound is so distinct and totally different from Red Red Meat. It’s kind of it’s own thing. What drove you to that sound? Or how did you settle on it?

With Red Red Meat it was more of a band. We would rehearse and it was a rock band. With Califone it was all about sounds and there was more home recording. It became quieter and more subtle but I think that’s just a natural evolution. It seems like changes come real slow over the years with Califone. With Red Red Meat, we made four albums relatively quickly and dealt with things as a rock band, and there’s also the aspect of ProTools and different technology, so we had these. With Red Red Meat a little bit we explored electronics and samples and playing around with what the computer can do but with Califone it sort of really came to a head, and that’s a definite part of everything we do in the studio, is digital technology.

It seemed like that played a lot in the new album, especially?

Along with that I was wondering who your influences were initially and who they are now. Were there bands that drew you to the sound you play?

Eh, I don’t know. I guess all throughout the time I’ve been playing music, we’ve been trying to sound like The Faces or The Rolling Stones or The Kinks or something like that, but we’ve just been doing it wrong. You know, I never really had the chops to imitate anybody very well. I grew up with classic rock and then punk rock and then digging into weird folk music and American music and then those Éthiopiques records are big. It’s just a matter of doing what you like and doing what you want to hear and in our case doing it wrong.

Are there any albums you’re really into right now?

I’ve been listening to a lot of Arthur Russell, and still a lot of those Éthiopiques records. Yesterday I listened to Grifters records all day in the van. That was kind of nice.

Has moving to California changed things for the band? It’s got to be a different vibe from Chicago…

Yeah it is, but it’s also, you know, a lot of ways that those sort of changes came in the music is not necessarily a place but more of growing older and hanging out less, staying home more, stuff like that.

How was the living room tour?

Really good, I think we’re probably going to try to do some more of that in the next year.

How were the audiences? Is that a weird setting to have to sit in someone’s living room and play a show?

It’s really different and enjoyable and of course a lot more intimate and it’s just a nice way to play. It’s nice to play without a PA and without a sound system. With the songs on Stitches it was really nice to sort of learn how to play those songs really quietly. I think we did over 15 of those living room shows this year and it was really nice to do that and play the new songs before the album came out. That was really helpful.

Do you think it added to how your live show will be at Lincoln Hall?

Definitely. It definitely made me less afraid to play these songs. And it helped me with singing a lot.

Is this tour going to be different from the past?

The biggest difference right now is the band. For years, it was the same band with Ben Massarella, Jim Becker, Joe Adamik and me, and now we have Joe Westerland and Rachel Blumberg playing sort of drums and they have some keyboards back there, and Wil Hendricks is playing guitar and bass and has some synthesizers. It’s a different band so it’s a whole different feel. It’s new, so I think because of that it feels a lot better and a lot more fresh to me.

Like, I’ve been enjoying this tour more than I’ve enjoyed playing shows in probably five years. It’s been kind of great. It’s been great to change things up and it feels awesome to play right now, so I’m enjoying life right now. It’s good. 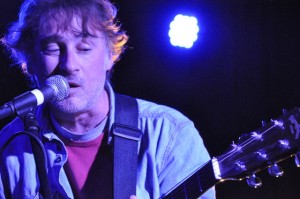