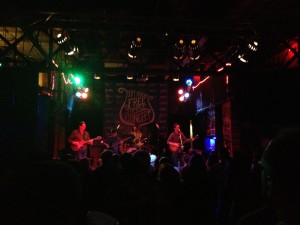 If you're reading this site, and especially this post, it's likely that you're no casual music fan.  It's time consuming, but not so bad being a hard-core -- we can obsess a little, we explore and poke and look for the next great thing... and sometimes we discover gold.  Yes, every now and then, this weird thing that motivates us really pays off, and it absolutely did for the smattering of Chicagoans who made it out  to Reggie's Rock Club in the South Loop on a Wednesday evening in October.

Our local rock radio station, WXRT, can be both maddening and a blessing.  No commercial radio is without it's slavish corporate blandness, after all it is really a medium to sell cars and soap and occasionally a ticket to an arena concert, but Chicagoans know that XRT can sometimes transcend this label.  Case in point: hosting Austin's White Denim for a free concert.  You didn't have to be the 50th caller or paint the station's logo on your bare chest at rush hour, you just had to show up at Reggie's before the 6:30 start time.

I'm not sure how much this gig was promoted, and I'm sure "Pretty Green" got a few spins during off hours, but the station's support for White Denim says a lot, since the band's tunes teeter on the verge of radio-friendliness.  And it's not for lack of hooks or even anthemic playing, it's that they pack more sonically into 3 or 4 minute songs that most bands do in an entire album.  It's difficult for even the obsessive to wrap their head around -- I'm not even sure what a casual listener would think.

The band has only played a smattering of headlining gigs in advance of this week's release of the brilliant Corsicana Lemonade, so this show was a treat not only for the audience, but also for the band.  Where the previous XRT free concert I attended at Reggie's (Dawes, back in April) produced a perfunctory 45 minute album promo set with a handful of perfunctory hits, White Denim's performance did not yield for nearly 80 minutes --  in fact, it got stronger as it went along, hitting the high points of Lemonade, but also diving deep for a career spanning set that delivered the tunes, and Denim's trademark non-stop "suites" that their growing legion of fans have come to expect.

Corsicana Lemonade> River To Consider, Cheer Up/Blues Ending, Pretty Green, Limited in Stature, Anvil Everything> Change My Mind > Start To Run, Come Back, Place To Start, Distant Relative Salute, I'd Have It Just The Way We Were, Street Joy, At Night In Dreams > Mirrored and Reversed > Drug > All You Really Have To Do, Mess Your Hair 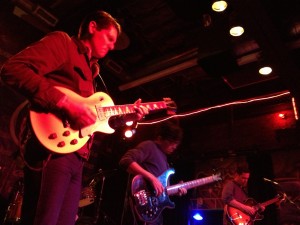 White Denim is a band that can sound like everybody-all-at-once and yet are effortlessly and distinctly like themselves.  At times, Austin Jenkins and James Petralli can produce guitar harmonies as sweet as the Allman Brothers Band, but they resolve them in dizzying, puzzling runs that you'd never predict, yet just seem right.  The rhythm section can zip off a blues crunch like Zeppelin, but pinning them into a genre, even rock, can seem fruitless.  You'll find soul singing, jazz tunings and prog-rock changes in equal measure.  They throw down instrumental passages between songs like a gauntlet, challenging themselves to find new ground in their songs and their audience to keep up.  The whole set balanced cerebral thoughtfulness and reckless rocking out in a way that I've rarely experienced.

So... this amazing band just dropped in for free set for a little over a hundred super-attentive and tuned in fans, in an environment that may have been one of our living rooms.  I can't say exactly where White Denim is going from here --  but the places they've been, and their comfort level occupying those spaces, makes following along an exciting prospect.  Yes, it pays to be a music freak every now and then.